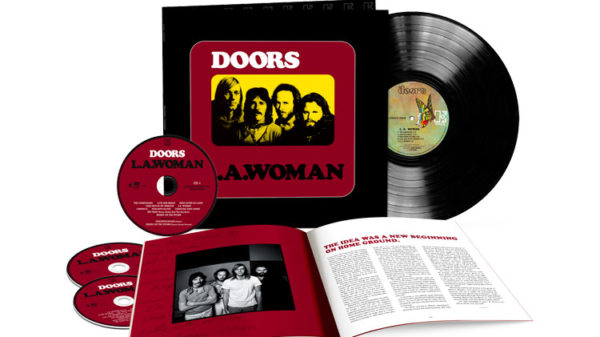 The Doors sixth and final album with Jim Morrison, “L.A. Woman,” will be released in a deluxe box set on December 3rd.

Originally released on April 19, 1971, L.A. Woman reached #1 on the Billboard 200 and sold more than 2 million copies, with songs “Riders on the Storm” and “Love Her Madly” also making the Top 20 Hits.

The deluxe edition will include three CDs and one LP, mastered by Bruce Botnick, the longtime engineer and mixer for the band. Also included are two bonus discs with two hours of unreleased outtakes and a 180-gram virgin vinyl with the stereo mix of the album.

The original demo of “Riders on the Storm” that was said to be gone forever, was recently discovered in a tape reel hidden in the band’s vault, is currently being used as a preview track for the L.A. Woman 50th-Anniversary deluxe edition. You can listen to it here! ⬇